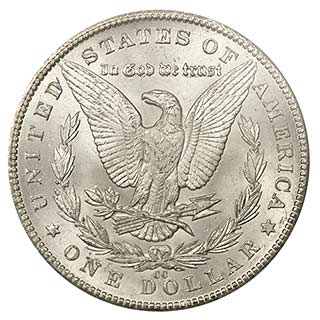 Holding a Carson City Morgan Dollar brings you back to a time and place of lore and legends. The American Wild West of the 1800s is renowned for its mystique and

adventure the world over. From the 49er Gold Rush to the Comstock Lode, nothing portrays the history and attraction of the Wild West more than Carson City Morgan Dollars.

It is for these reasons and others that we recommend acquiring Morgan Silver Dollars minted in Carson City. Because of their historical importance and the large base of collectors who focus on Morgan Dollars minted in Carson City, Nevada, pricing on CC Morgans have held strong even in an environment where other coins may have fallen in value. This offers you downside protection with added upside potential. (Check out Carson City Morgans we have for sale in stock) 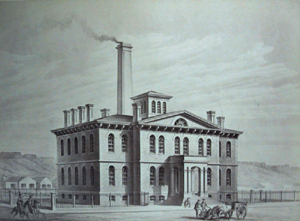 History of the Carson City Mint

Because of the difficulty of hauling the Gold and Silver across the Sierra Nevada Mountains to the nearest mint in San Francisco, Congress passed legislation in 1863 to establish a mint in Carson City. Construction began after the Civil War ended in 1865 and was completed in 1869.

How to Collect CC Morgan Dollars

The Carson City Morgan Dollar series is surprisingly easy to complete by a collector of average means. There are only 13 coins in the series and only a few stoppers exist in the collection. Apart from the 1889 CC and a couple of others, most of them are fairly easy to acquire in Brilliant Uncirculated condition.

Keep in mind that because of the crude methods used in their production compared to the well budgeted and better-equipped mint in Philadelphia, coins struck in Carson City were made in extremely limited numbers. Almost all CC Morgan Dollars are more scarce than their counterparts produced at other mints, and therefore do carry a premium compared to coins produced elsewhere in higher numbers.

We recommend that you consider a plan that includes focusing on the entire series. This is a reachable goal since there are only 13 different CC Morgans. Complete collections can sometimes bring a premium upon resale, and the thrill of finding that special coin that you have been waiting for is second to none.

A complete set of average quality certified CC Morgans can be obtained for less than $15,000. For those of you that are unsure if you would like to begin such an endeavor but like the idea of having profit potential while dipping your toe into the Rare Coin market, then consider getting started with the more readily available Carson City Morgans like the 1882-1884 dates. This date run is a great place for beginners and all these dates can be acquired for under $1000 in mint condition, for all three.

In many cases, it is wise to purchase the more readily available dates like 1882-1884 in grades that are above average for the issue. Conversely, some collectors might have to accept lower than average grades for the key dates like the 1889 and 1879 CCs. Others might decide to get only the finest above average grades.

This is the beauty of the Carson City Morgan Dollar Collection – it can be adjusted to fit your collection goals. One entire 13 coin acquisition of less than average grades could be purchased for less than $5,000 while a collection that exists in above average conditions could sell for over six figures. This collection fits well with investors of all calibers.

Each of the coins offered in this Special Release has been inspected and certified either by Professional Coin Grading Service (PCGS) or Numismatic Guaranty Corporation (NGC). These independent third-party grading services are highly respected the world over.  Not only do they verify the authenticity of the coin but they also state its condition.  NGC and PCGS have leveled the playing field between coin buyers and coin dealers setting the standards of excellence in the industry. To learn more about certified coins contact one of our Rare Coin specialists at Austin Rare Coins & Bullion.

It would be hard to argue that any coin embodies the history and allure of the American Wild West more than Morgan Silver Dollars produced in Carson City from the silver mined at the Comstock Lode. The Carson City Morgan series is the most collected series of coins within the Morgan Dollar Collection, which is the most collected and sought-after Silver Coins ever produced by the United States Mint. The series is highly sought after with legions of collectors that create a constant demand for coins like these. This provides downside price protection and offers true value.

Finally, the Carson City Morgan Dollar collection is one of the only collections of Pre-1933 U.S. coinage that can be completed by a collector of average means.

We think that this recommendation could pay off handsomely in due time and would encourage you to acquire these Carson City Morgan Dollars immediately.  Take a look at our current Carson City Morgan Silver Dollars and call Austin Rare Coins & Bullion to begin your collection. 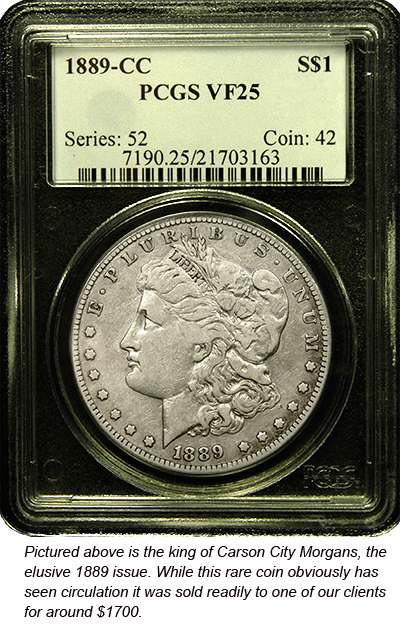 Estimated Price Range: $1,500 - $8,000 Comments: One of the toughest dates to acquire in the series, the 79 CC is highly desirable in quality condition. Very few survived to be graded by PCGS and NGC.

Number Survived: ~ 18,000 including all varieties.

Estimated Price Range: $750 - $2,800 Comments: A low mintage figure but a much higher survival rate compared to the 79 CC. There are many different varieties of 1880 CCs. Can be obtained in high grades.

Estimated Price Range:  $350 - $1,500
Comments: One of the most available of all the CC Morgans the
1882 – 1884 coins are the easiest and least expensive coins to find in
the entire series. This is a perfect date run for someone who is just
getting started in the Rare Coin markets and is an ideal entry point
into CC Morgans.

Estimated Price Range:  $325 - $1,100
Comments: One of the most collectible of all the CC Morgans the 1882 – 1884 coins are the easiest and least expensive coins to find in the entire series. This is a perfect date run for someone who is just getting started in the Rare Coin markets and is an ideal entry point into
CC Morgans.

Estimated Price Range:  $325 - $1,100
Comments: One of the most popular of all the CC Morgans the 1882 – 1884 coins are the easiest and least expensive coins to find in the entire series. This is a perfect date run for someone who is just getting started in the Rare Coin markets and is an ideal entry point into
CC Morgans.

Estimated Price Range:  $4,200 - $19,000
Comments: With a very low survival rate, 1889 is the key date and undisputed King of “CC” Morgans. As a matter of fact, it’s considered among the rarest of all Morgan Dollars produced by any mint. It’s extremely rare in Mint State and specimens with exceptional eye appeal are known to demand strong premiums.

Estimated Price Range:  $650 - $5,000
Comments: The 1891 CC, while slightly less rare than the 1890 CC, is still considered a scarce date within the series. The coin becomes hard to find in any grade above MS 64 but is readily available and affordable in MS 62 or lower.

Estimated Price Range:  $900- $3,600
Comments: The 1892 CC is one of the toughest dates in the series,
especially in higher grades. With a very low survival rate, the 1892 CC ranks among the rarest of the entire Morgan Dollar Series.

* Average prices indicate a range for average coins for those grades. Often times coins exhibiting above-average characteristics for the grade will be more expensive than prices listed.

Call 1-800-928-6468 today and let one of our Carson City Silver Morgan Dollar Specialists assist you.