Minted to Celebrate the End of World War I 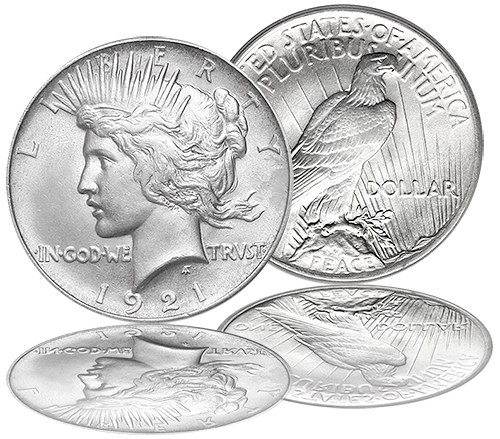 The Peace Silver Dollar is a popular coin among collectors, and an important part of US coin history. The Peace Dollar was the last dollar coin ever minted for circulation with a silver content of 90%. For this reason, many coin collectors cherish the Peace Dollar as the last genuine American silver dollar.

To commemorate the end of World War I and to honor world peace, the United States created the first Peace Dollar in late December of 1921. This Silver Peace Dollar was produced intermittently from 1921 to 1928 and then again in 1934 and 1935 at three of the United States Mint facilities located in Denver, San Francisco, and Philadelphia. The mint marks on the Peace Dollar can be found on the reverse side of the coin located below the word ONE.

Designed by Anthony De Francisci in early 1921 a modern Art Deco Liberty Head with a crown of rays was depicted on the obverse and a bold majestic eagle at rest on a high mountain top, clutching the laurel wreath of Peach in his talons, on the reverse.

A Coin With A Fascinating History

Initially this design was sculpted in high relief, but was minted in this style for only one year. This style relief caused difficulty in stacking at the Federal Reserve Banks and also shortened the life of the very expensive minting dies. The Peace Dollar is only the second coin in United States history to be struck in high relief. In 1922, George T. Morgan, then Chief Engraver of the United States Mint, made some significant changes without the knowledge of its designer. Morgan lowered the relief and flattened the concave fields thereby increasing the life of the dies and insuring easier mass production and storage.

The Peace Silver Dollar was designed by Anthony De Francisci. On the obverse side, the silver coin features a design of Lady Liberty, while the reverse of the Peace Dollar shows a proud image of a standing American eagle resting on top of a mountain watching the sunset.


2021 Commemorates the 100 year Anniversary of the Peace Silver Dollar!

With a coin as historical and beautiful as this, there’s no doubt that the worth of these silver dollars will increase over years to come. Recently collectors have rediscovered the Peace Dollar and they have regained the popularity they deserve. Certain dates in true mint condition have become extremely rare.

Due to wholesale melting of silver dollars during World War II and the closing of US Treasury doors to silver coin minting in 1964, Peace Dollars have become increasingly scarce. We recommend you acquire only brilliant uncirculated Peace Dollars possessing full strike and superior lustre.

In God We Trvst?

Was there a mistake made? Actually, the Peace Dollar's inscription of the motto "In God We Trust" uses the Latin version in which the letter V is substituted for U. This was the grand design of De Francisci, and is just one of many details that set Peace Dollars apart from other coins from the US Mint.