All About U.S. Mint Silver Dollars 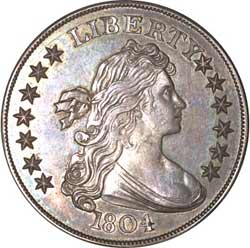 Since the first silver dollar rolled off the presses of the U.S. Mint in 1794, Americans have enjoyed a fascination with every series of official legal tender silver dollars.

From one of the most expensive 1804 silver dollars that sold at auction for $4.14 million, to the most affordable mint condition silver dollar, each one is prized for it's pure silver content, unique designs, and link to America's history.  A Brief Review of US Silver Dollar History.

Her beauty has inspired collectors for over 135 years. She is the most classic and best known design of all U.S. Silver Coins. She is the inspiration and enduring symbol of American freedom. We call her "Miss Liberty" and she adorns the most collectable silver coin of all– the Morgan Silver Dollar.

The Miss Liberty design is surrounded by the date, 13 stars for the 13 colonies and the words E Pluribus Unum– translated "one from many." This refers to the United States formed as one nation from 13 colonies.

The reverse design is a proud american eagle with wings widespread preparing to take flight. The eagle is our symbol pride, prestige, and strength. The spread eagle holds an olive branch representing peace in its right talon, and three arrows in its left representing America's willingness to fight for our freedom. The official designations of United States of America, One Dollar, and In Gold We Trust along with a laurel wreath adorning the reverse shows detailed engraved features.

As with all rare coins, we recommend you acquire the finest quality and rarest Morgan Silver Dollars you can comfortably afford. The collector with an eye to the future and a long-term outlook may look forward to profiting handsomely over the coming years.

While the above features have remained constant throughout the years, there have been essentially three main variations of the reverse used in the Morgan Dollar series. In the first reverse design, the breast of the eagle is flat, and concave and the eagle have eight tail feathers. This design was utilized only in 1878. The second reverse design depicts the breast of the eagle as still flat and concave, but the eagle exhibits only seven tail feathers and has parallel arrows. This design was used for the majority of other 1878 silver dollars, and for some 1879-S and 1880-CC dollars. A subcategory of the second reverse is the 7/8 tail feather design. This is where the seven tail feathers were stamped over the original 8 tail feathers.

This iconic coin was only minted from 1878 to 1904 and was minted again for one year in 1921. A symbol of the American West, the Morgan Dollar represents the growth of the United States and is the cornerstone of early American commerce. Talk to an Austin Silver Dollar Coin Dealer to find out how to collect silver dollars and how you can build sets to increase their value.

Morgan Silver Dollar Designs by the US Mint

No silver dollar in the world has been more celebrated, collected, or beloved than the official legal tender silver dollars released during America's Wild West Frontier Days. In the 1870's Wild Bill Hickok, Buffalo Bill Cody, and Kit Carson were still fighting Indians and paying for drinks with a silver dollar.

Peace Silver Dollar Designs by the US Mint

Originally issued to celebrate the end of the "war to end all wars," Peace Silver Dollars were the official silver coinage with a one-dollar face value, issued during the Roaring 20's through the final release in 1935.

Silver American Dollar Designs by the US Mint

A variety of silver dollars have been issued by both the United States Mint and other countries over the decades. Many of the U.S. silver dollars were struck in limited quantities as collectibles honoring important historic events. Through the years the Silver American Eagle has become one of the most recognized and popular silver bullion coins in the world. Their consistent gem-brilliant uncirculated quality and .999-purity makes them an industry leader trusted by investors and collectors around the world.