For over 2,000 years, coins struck in silver and gold have been among the most popular forms of money ever created. From the early days of Greek and Roman coinage, Europeans have traded with gold coins and silver coins. Ancient Coins were also struck in silver and "base" metals like bronze and copper. However, gold coins, because of its intrinsic value, have historically been the most popular medium for exchange.

Today, the US Mint reports there are 125 million coin collectors in the United States. This number is up dramatically from 20 million believed to collect coins a decade ago. In addition to US coin collectors, there are millions of other coin collectors around the world! In fact, coin collecting is widely recognized as one of the most rewarding hobbies. While it was once known exclusively as the "the hobby of kings" due to the high cost of coins, today coin collecting is for people of all ages. Today young collectors to seasoned gold investors who focus on rare gold coins as collectibles are plentiful.

From Coin Collecting to Coin Investing 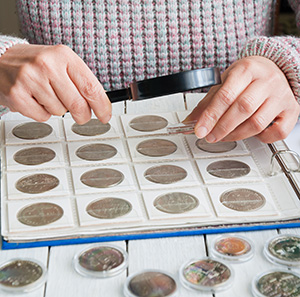 Throughout history, many coin collections have produced substantial profits for their owners. This is particularly true for coin collectors of this century. Harold Bareford reportedly purchased a collection of US gold coins for $13,832 in early 1950s which was resold at auction in 1978 for $1.2 million. This is just one of many anecdotal examples of how profitable rare coin collecting has become.

Historically, the financial support for the US Rare Coin market came from coin collectors who bought coins for their beauty and historical significance. However, substantial profits realized by owners of rare coin collections in the 1970's and 1980's moved coin collecting from being more than just a hobby as many investors began collections targeted at generating long-term profits.

Austin Rare Coins & Bullion would like to remind prospective coin buyers to be aware that there are many different ways to collect coins. Some coin collections are built just for the fun of it while other other collections are built with the goal of creating long-term wealth and profits. Keep in mind that past performance is not a guarantee of future results. Not every investor's rare coin portfolio will enjoy exact results of another.

While collectors view their coins as fine art and as tangible remnants of the cultural and economic forces that created them, investor interest is prompted by the fact that coins of proven rarity have shown high rates of appreciation. However, the line between the collector and investor often becomes blurred. Collectors can't help but be pleased when coins they sell bring a profit. Investors begin to see their coins as works of art to hold onto. Investors also study the history and become knowledgeable about a coin for future prosperity and return on investment.

Both investors and collectors come to realize the importance of value. Intellectual curiosity, aesthetic sensibilities, and enjoyment can turn into a valuable endeavor that leads to wealth that can be seen as a lucrative portfolio of coins.

Investors have also become significant buyers of bullion coins like American Eagles and Canadian Maple Leafs. These gold coins are official legal tender coins created for the purpose of precious metals investment. Since the ban on gold ownership by US citizens was lifted in late 1974, millions of Americans have added gold, silver, platinum, and even palladium coins into their investment portfolios.

Financial advisors recommend investments in precious metals as an important part of portfolio diversification. It serves as a reliable hedge against inflation and also serves as an enduring storehouse of value for the long term.

Six Major Categories of US Coins

US coins minted prior to 1965, and particularly coins minted prior to the 1933 ban on Gold, have proven to be among the most popular and lucrative areas of US rare coins. While profiling all US coins would be enough to fill a book we will attempt showing the most commonly purchased US rare coins for investing and collecting. Here are six key areas that are popular today: 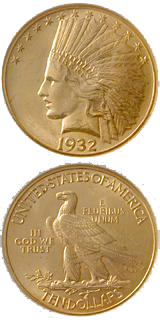 20th Century Type Coins – Before 1965, this would include silver dimes, silver quarters and nickels, pennies, and modern issues created for circulation by the public.

Current Issues – The Statehood Quarters, Sacagawea Gold Dollars, Buffalo Silver Dollars, and all circulating coins you can get at any local bank would be current issues.

Why Are Some Coins "Rare"

Most coins that are scarce today started out as common issues struck in large quantities by the US Mint. Even though thousands or even millions of copies of a particular coin were originally minted, after many decades, the vast majority were worn out in circulation, lost, or destroyed. As a result, these remaining coins in pristine condition have become rarer and harder to find over time.

Other coins were minted in very small quantities to begin with. This group of coins includes older proof issues, test strikes, pattern coinage, and error coins. However, rarity refers to more than just the number of coins in existence. It is also a function of investor/collector demand for the coin. If a coin is said to be rare or scarce, it implies that the available quantity is small relative to the current or expected demand for the coin in the marketplace.

How Rare Coins Are Classified

As with any investment or collectable, the value of a rare coin is established in a free marketplace by supply/demand. The size and intensity of demand is influenced by these criteria:

Here's a brief discussion of each of these factors:

The lowest uncirculated grade is MS-60, while the highest is MS-70. The "MS" stands for Mint State. In between, there are grades MS-61, MS-62, MS-63, and so on, all the way up to MS-70-a perfect coin. Each step up the grading scale indicates an improvement in quality, rarity, and usually a dramatic difference in the coin's price. 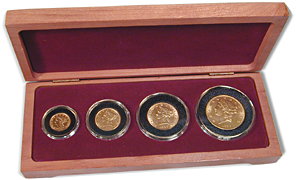 Today, the distinction between collectors and investors has become blurred. This is because investors have learned that the qualities of outstanding coin collections also produce outstanding portfolios. Many kinds of collections offer the same range of diversification that would be provided in a pure investment

portfolio. An investor should follow the same methods as a collector in formulating a strategy, buying coins carefully over a period of years, holding them for the long term, and then liquidating them when an appropriate opportunity presents itself when prices are high.

Perhaps the most popular and rewarding portfolio strategy, is set building. The two basic forms of collections are "type" and "series." A type set is made up of all those coins sharing a single, specific characteristic such as design, designer, or denomination. A series consists of one coin from each date and mint of a particular type. Other strategies include collecting by die variety, by historical period, by mint mark, or by individual year or first and last year of issue of a particular coin.