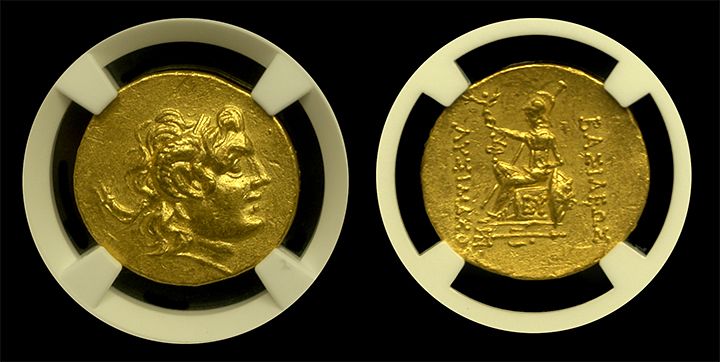 Was Thrace influenced by Greece & the Macedonian Empire? It is a fact, Thrace was conquered by Philip II, king of Macedonia. This occurred in the 4th century BC. Once Philip the II died Thrace became a part of the great kingdom of Alexander the Great. Following Alexander’s death, his empire was divided among his generals, who established independent kingdoms including Thrace.

Lysimachus, who reigned from 323 to 281 BCE, was the general who succeeded Alexander as the ruler of Thrace. According to Herodotus, an ancient Greek historian, Thrace was highly influenced by Greece and the Macedonian Empire's culture. But, were they?

Yes, Thracian coinage gave homage to the once great leader of the Macedonian Empire. The Thracians under the leadership of Lysimachus used Alexander's portrait on the front of their coins. However, on the back "Lysimachus named himself “king” and pictured the goddesses Athena and Nike (Victory) crowning his name with laurels, which symbolized victory or honor."

Many Thracians spoke Greek but that didn't mean they acted like Greeks. Even though they were controlled by the Macedonian Empire, they wouldn't change their Thracians ways. They were still considered “barbaric” to the Greeks. For example, "Herodotus mentions that the Thracians had a habit of selling their children into slavery." It is no wonder that during that period many Thracians could be seen in the service of Greek households.

Thracians also had an unorthodox belief in immortality and very curious sexual and marital customs. It was ok for Thracian men to have several wives. The more the merrier. Furthermore, when the husband died his wives would fight over who was his favorite. The winner was given the privilege of being killed. This was so she could be laid by his side in the grave.

So, was Thrace influenced by Greece? Maybe a little, but the Thracian people remained being a defiant conquered people. In 279 BC Celts advanced into Thrace. Later Rome invaded Thrace and in 168 the governing of Thrace passed to Rome. As a result Thrace became a client state until 46 AD. After that, it officially became a Roman province.