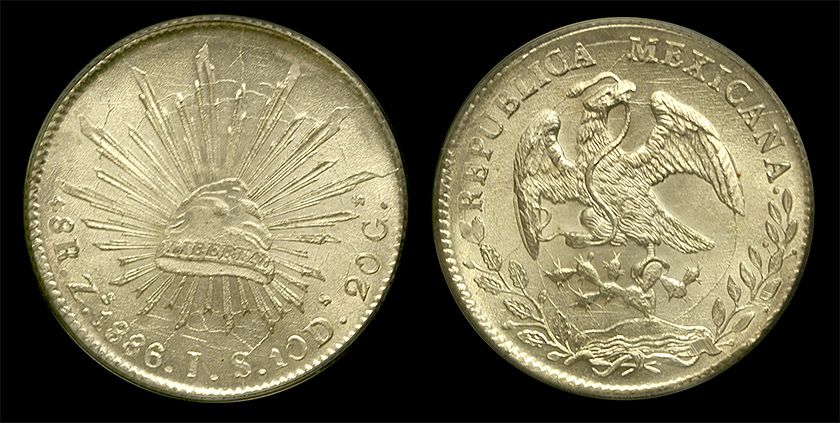 Spain was having serious trouble in the early 19th century. Napoleon’s armies had invaded their country. Napoleon was in control of most of the Spanish peninsula by 1809. In addition, the Spanish were suffering defeat after defeat. Spain's heavy losses were attributed to incompetent generals. New Spain, now called Mexico, saw their window of opportunity...

The French invasion of Spain led to the outbreak of revolts all across Spanish America. It was the start of the Mexican liberation from Spain. Mexican war for independence was hard fought. It was not a single event, but many regional struggles that occurred in a revolutionary civil war that lasted 11 years.

During Mexican war for independence, numerous mints in Mexico had still been in operation. In fact, these mints were providing coins for both the supporters and opponents of the Spanish crown. On the other hand, insurgents issued coins that bore the titles of Ferdinand VII. Subsequently, both Royalists and Insurgents also issued counter-marked pieces.

With the adoption of the 1824 republican constitution, the United Mexican States began issuing new coins. Consequently, these coins were meant to unify Mexico with new standard design. The coin's new design featured a Mexican eagle on the obverse. It also had the legend "República Mexicana" written above. The reverse featured a liberty cap with rays behind.

In the late 1800’s the US was issuing massive amounts of silver dollars called Morgan Silver Dollars. But, in Mexico, their equivalent coin was called the silver 8 Reales.  However, the Reales were heavier than a US silver dollar. The new “Cap and Rays design” made from 1824-1897 weighed an incredible .96 ounces.

The Mexican coat of arms features fine detail of an eagle atop a cactus, clenching a snake in its mouth. As mentioned before the reverse has Cap and Rays design. In conclusion, they adopted the Phrygian cap. It is a symbol of liberty used on many early U.S. coins.

This particular coin in the video below is graded by PCGS is genuinely rare. In fact, only 181 examples in all are graded by PCGS and NGC combined. This one is in Mint State 65. It is one of just 30 and only 8 are known finer. This secures it well in the top 20% for the issue.  Coins like this are a solid value. It is also a great way to commemorate Mexican Liberation From Spain.