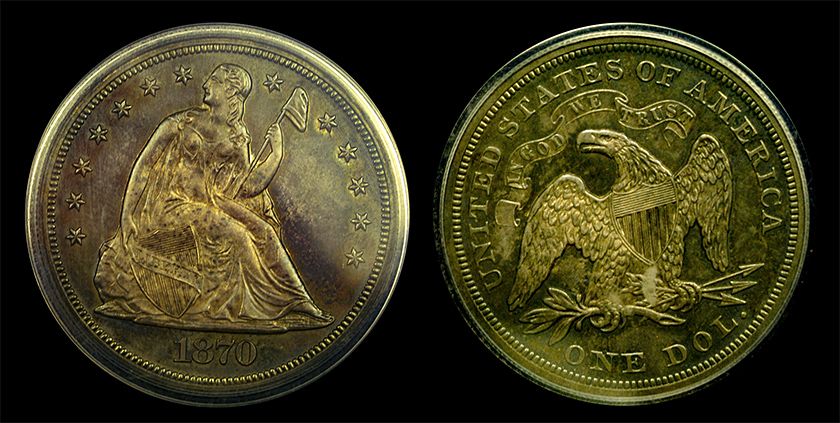 The Seated Liberty Dollar was struck by the United States Mint from 1840 to 1873. Another unexpected change was the addition of "In God We Trust". It wasn't the first coin to us this phrase, but it was added to the dollar to follow its use earlier in the decade.

The Coinage Act of 1873 ended production of the standard silver dollar. In fact, the US Mint authorized creation of a Trade Dollar. The Trade Dollar was slightly heavier than the standard dollar and could be used in foreign commerce. To clarify, the Coinage Act of 1873 temporarily ended production of the silver dollar for American commerce. Unfortunately, the Seated Liberty Dollar History did not go through a revival. In short, even though production of silver dollars resumed in 1878, it resumed with the new Morgan dollar. This occurred after the passage of the Bland–Allison Act.

An 1870-P Seated Liberty Dollar in Proof-64 quality is shown below. In fact, Seated Liberty Proof coins that survived have become very valuable. Especially since this coin only had a mintage of only 1,000 coins. Austin Rare Coins is offering this lovely Proof Silver Dollar at an excellent value.

This proof coin is adorned with multiple blue and purple hues on both sides of the mirrored surfaces. This timeless design is admired by many collectors. In conclusion, you could expect this coin to be worth more than double in the next nominal grade up.

If you'd like to know more about Seated Liberty Dollar History call Austin Rare Coins & Bullion at 1-800-928-6468. There are Rare Coins Advisor ready to help you.