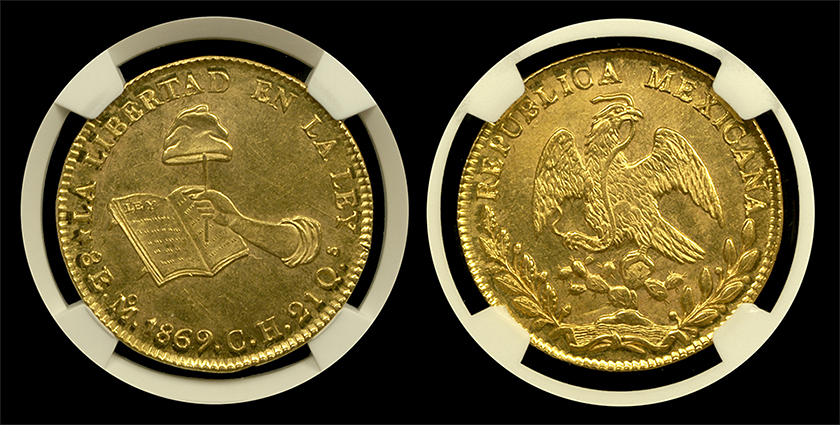 Mexico first declared Independence from Spain in 1810. To clarify, this happened on September 16th, 1810. Before then this area was more commonly referred to as New Spain. The declaration of Independence led to a 11 year war against Spain. Unfortunately, it wasn't until August 24, 1821 that Spain finally recognized Mexico's Independence.

This was the dawn of the once New Spain turning into the new Mexican Empire. Gone were the days of the Spanish Catholic monarchy. A new federal republic was finally declare and by 1924 they codified Mexico's new Constitution. It is important to note, there were some reattempts by Spain to re-concur New Spain. However, by 1836 Isabella II and Spain finally fully recognized Mexico's independence.

The design is one of our favorites when it comes to world coins. Once Mexico declared Independence from Spain they decided to create a new look. The reverse of this coins depicts the seal of Mexico. This same seal adorns the Mexican flag. It shows an eagle on a cactus holding a snake in its talons. The obverse of the coin shows a hand holding a pole with a cap on the top. The hand is about to write into the book of law.

This beautiful coin was graded Mint State 63 by NGC. What is most important, is that it was struck in Mexico City. It is difficult to find coins with such attractive eye appeal and truly proof like surfaces. Only 22 of these coins have been certified in all grades combined and this is one of only three in Mint State 63 with none known finer.

Containing over $1400 worth of gold alone, we feel high end examples of this series are overlooked and undervalued. This is why Mexico's First Republic 8 Escudo like this is so highly recommended. Above all, this is the finest coin we have seen from this series from 1823-1873.